Bharathi Park again in the news, Smoking out the clean air 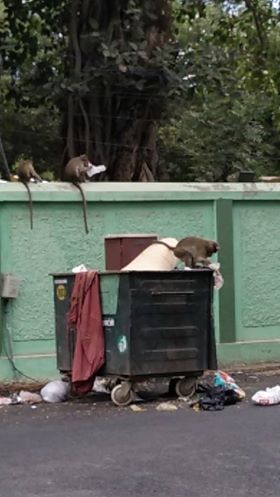 Few months back Bharathi Park had some monkeys playing around

The residents near Bharathi Park in Saibaba Colony, are in for another bout of health hazard with the Corporation staff burning the waste inside the park premises, which incidentally also has the office of the Chief Engineer, TWAD West Region nearby.

It also has a maternity hospital in the neighbourhood, a corporation workshop in the vicinity also adds to the stench generating from the area.

The issue has been raised on WhatsApp and also with the Junior Engineer regarding this. No action has been forthcoming from the officials.

To go back, this is not the first time this is happening, says a resident quoting officials who promised that they will not repeat this.

This has led to various cough and lung related health issues to be on the rise in the neighbouring areas since the air is thick with smog after the smoke from the park envelopes the area in the evening.

Here is a video of the incident, and you can see the tree is almost dying underwhich the fire is lit.

We apologise for the vertical alignment of the video but hope you get the picture.

Demonetisation to demonisation to supporting Modi

Did you know that the Coir Woven Industry has a future for our Nation?